It’s been a hectic few weeks in my world but oh so rewarding.

I had the opportunity to be involved in organising the Cruelty Free Festival in Perth this year. Well okay, it was more by default. My bloke, Geoff, took on the role of Chief Food Organiser months ago, while I happily carried on doing other stuff. Man, did he ever take it on – face buried in the laptop as I got to know every hair on the back of his head by its first name. Monosyllabic responses to my conversation-starters, even the riveting ones!

He was doing an awesome job, but as the festival itself loomed nearer he was suddenly offered a short-term casual job that was too good to turn down (and happened to coincide with the festival and just prior to it), accepted it, proceeded to delegate his festival load and bang – mones collapsed under the weight of the not exactly-welcome responsibility for…….the cake stall (insert dramatic music here).

Lucky for me, if there is one thing vegans usually do when it comes to food (besides eat a lot of it), is report for cooking duty in stunning fashion. Our joy in vegan food is the shareable kind, and most of my peers are thrilled at any opportunity to showcase the wonderful array of eatables to anyone who stands still long enough. Or moves. Or breathes. Or doesn’t. It only took a few emails to follow up the fine work Geoff had started to enlist a veritable army of happy bakers.

The big day arrived, just last Saturday, and we unloaded our heaps of gear at the Earthwise Centre in Subiaco. The weather was windy and rainy and we were armed with a cheapie marquee off ebay. The struts were as sturdy as garden hose and the cover was less so. With the assistance of about a half dozen of our peeps, we assembled the doodads and attached the roof and three sides. Geoff and I walked to our nearby car to get something and heard a terrified yowl. We looked back from whence we came. With one gust, the wind had lifted our carefully-erected marquee up like a parachute, and there it was – airborne, with a squealing person dangling from the bottom of each strut, hanging on for dear life.

Struts were bent and tent pegs too, while the wind kept blowing just to remind us it was still there. As we put everything back together, allowing places for the wind to blow right through the marquee rather than parachute it, I figured things would improve from there. And they did.

Start time was 10:00 and the atmosphere charged as we drew closer to opening up to the public. The festival consisted of various stalls promoting cruelty-free living, social justice and sustainability. For example, Sea Shepherd had a stall, so did SAFE (Saving Animals from Euthanasia); there were cosmetics and clothing and petitions. The Perth festival was put together by Animal Rights Advocates (and they rock). ARA had organised continuous live music throughout the day; there were talks and cooking demonstrations and a fantastic transportable water bubbler station where people could refill their drink bottles.

And of course there was food. What positive, happy vegan event exists without it? There were three food stalls in our marquee; Geoff’s homemade spicy Italian hotdogs (aka ‘notdogs’), Earnie’s homemade savoury pies, and of course our cakey stuff. Our happy bakers deposited their wares and we had everything from Rainbow Spongecake (or Pride Cake, as Creator Kelly declared), to Golden Vanilla Cupcakes with Fluffy Raspberry Coulis Notbuttercream frosting (that’s with fresh raspberries and a nod to our beloved vegan cooking and baking Pillar of Awesomeness, Isa Chandra Moskowitz). We had Salty Choc Chip Oatmeal Fig Cookies (and they were amazing!) to Blondies (delish!). There were gluten-free cookies too. What a spread! We also had booklets of the recipes used in some of the baked goodies on offer.

Basking in management duties, I declared that we’d set the cakes up at 09:45 so they’d be ready for presentation and sale at 10:00. We made a good attempt, but no sooner were the cakes on the table at 09:45 – still in plastic containers and whatever other means of transport were employed – than the humans started buying. Doh! We had cake covers and platters and all manner of purty stuff for displaying the goodies, but no. The humies were hungry. The cakes were within striking distance. They grew themselves legs and walked off the table.

Geoff fired up the VGQ (that’s vegan for ‘BBQ’) and started frying onions. This was 10:00am in the morning, before the pm, and yet once the aroma of sizzling onions wafted over the footpath, a queue of droolers formed. Try breakfast, people!

He’d made 150 snaggers in our kitchen, calculating that number should see us through. Two and a half hours of constant hotdog-assembling later, and they were cleaned out. That is one hotdog per minute for 150 minutes. So the horde descended on Earnie and his pies because poor old Earnster and his weenie piemakers had been hidden behind the large and glamorous VGQ – suddenly he was visible and set upon by the hungries, forking out his Better-than-beef and corn mornay pies like a tornado of pieness. The guy even made his own pastry! And if you’re having any silly ideas, let me assert right here that Earnie is MY pastry makin’, pie-bakin’, meat forsakin’ friend – go find your own.

All this time, of course, our cake stall was going ballistic, cakes and cookies heading off in every direction. Satisfied customers coming back for more and I don’t mean just once. Some people spent a lot of time in the three queues outside our marquee, sampling a hotdog, going back for seconds, trying a pie, having anothery, finishing off with a cake. And then a cookie. And it was raining.

We had so much cake! So many cookies! Slices and stuff! We sold it all!

The response to our offerings was enthusiastic and heartwarming. People were amazed by the food, in awe that it was free of animal products. One big bloke had bought a hotdog and was stomping past the ARA stall. Tracy couldn’t get up to our marquee fast enough to tell us that he’d taken a bite of his hotdog and declared (possibly paraphrased), “Bullshit! This has got meat in it!” When advised by someone nearby that it was definitely vegan, he took another bite and said, “BULLSHIT! This has definitely got at least meat juices in it!” No dude, let me officially broadcast to you now that that sausage, the one that has hopefully got you thinking about who you eat, is made of gluten flour, besan (that’s chickpea flour) and spices.

I wandered up to the building in which the talks and cooking demos were being held. Peeping through the windows, I noticed that every seat in the place was filled. People were listening intently to Nick as he talked about issues relevant to the cruelty-free theme. Maree (yes, our own beloved Animal Actionist) waited outside with pamphlets, information and the documentary Earthlings for anyone who had been stirred to find out more. And there were many people who had been stirred.

As the day wound down and the rain really set in, some of us walked around, packing up and reflecting. It is clear to me that for whatever reason, people are really starting to question where we are as a species. This includes, of course, where we find ourselves in time and on this planet, as one of countless species who also share our earth. Their interest seems more than politeness, it has an energy that suggests shifting consciousness and a desire to make a change for better, for us and for our fellow beings. They embraced our food, ideas and philosophy and all this in the rain. Perhaps they are now considering this – would our world be anything but better with less cruelty in it?

The answer? As if.

Note to self: Might need a bigger venue for next year’s festival…..

For the critters
Mona 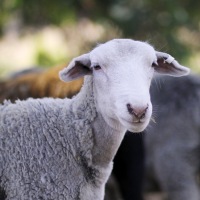